A government advisory panel of health experts on Thursday recommended that a COVID-19 vaccine booster shot be offered to all Israelis over the age of 40, further widening the national campaign intended to combat the highly infectious Delta variant of the coronavirus.

The program has already seen over 1 million people over the age of 50, the immunocompromised and healthcare workers receive a third dose of the shot.

The experts also recommended administering the third vaccine dose to pregnant women, teachers, additional healthcare workers, staff in nursing homes and welfare programs, prisoners and prison guards, regardless of age. It also backed boosters for Israelis who are overweight or diabetic.

Under the panel’s recommendation, the booster would only be offered to these groups five months after the second vaccine dose and would not be available for those who recovered from COVID-19.

Following the announcement, the Meuhedet and Maccabi health providers said that they would start administering the boosters to those aged 40 and up starting on Friday, pending final approval.

Prime Minister Naftali Bennett, 49, said that he would get his booster shot on Friday and called on all people who are eligible to get the third vaccine dose.

“This is the time to ramp up the effort to subdue the Delta variant and prevent a lockdown. It’s within reach — go get vaccinated,” he said in a statement from his office.

The expert panel had considered expanding the coverage of boosters to all those who have had two vaccine doses, provided five months have passed since their last shot. However, that proposal was ultimately not approved.

On Wednesday, a report by Channel 12 news said that the boosters would likely be offered next month to all Israelis over the age of 12.

Channel 12 reported on Thursday evening that officials on the panel have assessed that without a third shot, some 100 vaccinated individuals aged 40-49 will experience severe COVID illness over the next 30 days.

The experts also increasingly believe that the Delta variant is not particularly capable of bypassing the Pfizer vaccine used in Israel, rather, it is simply the waning effect of previous shots that is causing vaccinated people to fall ill, according to former Health Ministry director-general Gabi Barbash. The booster’s ability to once again protect much of the population from Delta once administered is evidence of this, he told Channel 12. 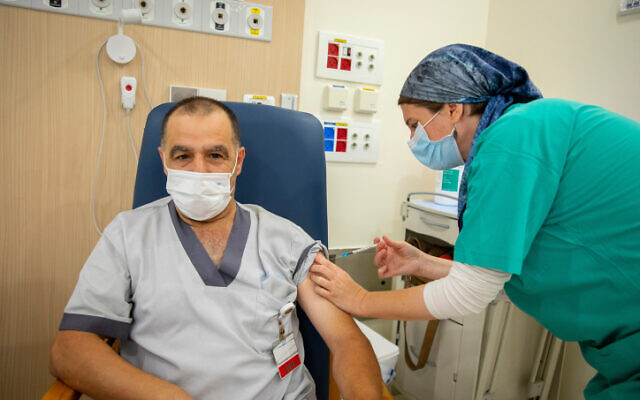 Medical staff receive their third dose of a COVID-19 vaccine in Jerusalem, on August 17, 2021. (Olivier Fitoussi/Flash90)

Eran Segal, a computational biologist at the Weizmann Institute of Science, said that there has been a slowdown in the rise of serious COVID-19 cases, which he credited to the new drive to give booster shots to all Israelis over the age of 50.

“In all honesty, we don’t know what will win out, the campaign or the infection rate, but the last four days bring optimism,” he said. “I believe that around the first or second week of September, we’ll halt [rising morbidity].”

Last month, Israel became the first country in the world to begin offering booster shots to those over the age of 60, and, last week, expanded the eligibility to those over 50. According to Health Ministry data on Thursday, 1,245,325 Israelis have since received the third dose.

United States health authorities announced on Wednesday that they would begin making the booster shots available to all Americans on September 20. They cited studies showing a weakened immune response some eight months after receiving the second dose of the vaccine.

Meanwhile, the Health Ministry said on Thursday that a new variant of the coronavirus has been identified in Israel, with local and international officials fearing it could be more violent and infectious than the currently prevalent Delta strain.

The variant, named AY3, is a further mutation of Delta, and has thus far been found in several countries, including the US.

Ten cases have been diagnosed in Israel, eight in returnees from abroad and two that appear to be community infections, Hebrew media reported.

However, some experts have cautioned that it is too early to say whether the strain is indeed more dangerous than Delta. 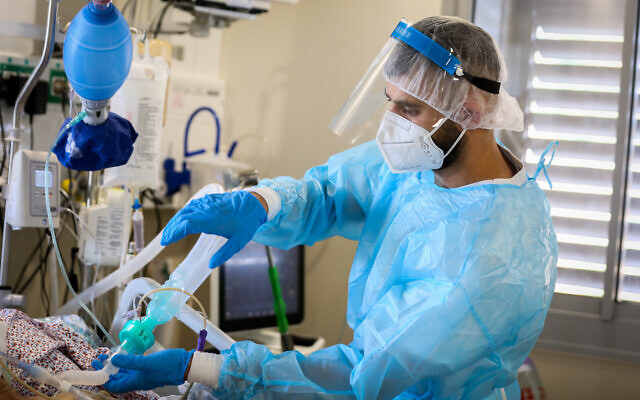 A hospital worker treats a patient at Ziv Medical Center’s coronavirus ward, in the northern city of Safed, on August 11, 2021. (David Cohen/Flash90)

Health Ministry figures updated on Thursday evening showed almost 8,000 cases were identified during the previous day, with the rate of positive tests at 5.5 percent — slightly lower than in recent days. Active cases are at 61,969.

The ministry said that 599 Israelis are hospitalized in serious condition due to COVID-19, of whom 104 patients are on ventilators.

Nearly 1,000 patients are currently hospitalized, crowding COVID wings, amid government promises to recruit thousands of more doctors and nurses and to pump billions of shekels into the health system.

The death toll since the start of the pandemic climbed to 6,748 on Thursday.

After daily infection numbers dropped to barely more than a dozen in mid-June, the country has experienced a massive surge in COVID-19 infections.

Health officials expect the numbers to climb even higher and have warned the government that, at current rates, during September, the number of patients requiring hospital treatment will reach 5,000, half of whom will be in serious condition.